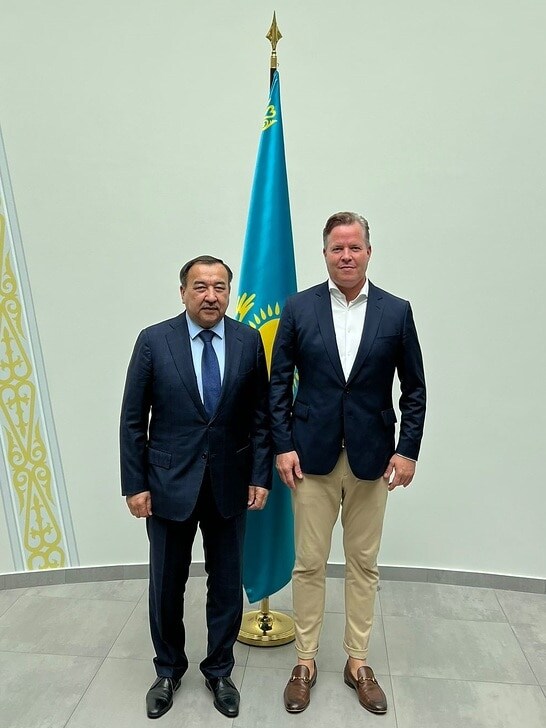 During his trip to Berlin, Oliver Hermes, President and CEO of the Wilo Group, met on Thursday (21/07) the new Ambassador of the Republic of Kazakhstan to the Federal Republic of Germany, H.E. Nurlan Onzhanov. The bilateral exchange focused on current topics such as security of supply and fragile supply chains, as well as the fundamental economic relationship between the two countries, which offers possible solutions in these challenging times.

The Wilo Group has been active in Kazakhstan for more than 22 years. With the opening of the site in Almaty in 2018, the multinational technology group once again underlined the importance of the country. The site acts as a platform for Central Asia and is thus the starting point for business activities in this region. Oliver Hermes, who is also Honorary Consul of the Republic of Kazakhstan in North Rhine-Westphalia, sees even more potential for Kazakhstan in the current geopolitical situation: “Kazakhstan has already convinced us as hub between Europe and Central Asia and now has the historic opportunity to become a strategic partner of Germany in the whole of Eurasia. Not least as a logistical hub between the EU, the EU’s eastern neighbours and Asia, the Central Asian country is of immense importance within the EU’s new connectivity strategy but also against the backdrop of current geopolitical changes.”

H.E. Onzhanov and Oliver Hermes had a very concrete exchange about the possible fields of action of this strategic partnership. The country on the Caspian Sea, which borders Russia and China among others, is the ninth largest country in the world in terms of area and at the same time by far the most important German trading partner in Central Asia. Kazakhstan is one of the most important crude oil suppliers to Germany and the EU. It also has rare earths and other indispensable metals for high technologies. Kazakhstan is increasingly focusing on the development of green technologies, renewable energies and hydrogen and can thus play an important role in the German energy transition.

At the end of August, these issues are to be discussed further together with a high-ranking Kazakh delegation during a trip to Berlin. “I see great potential for cooperation between Germany and Kazakhstan in an energy partnership that could be expanded into a climate protection partnership. In return, German partners can make their expertise available for the expansion of the country’s industrialisation,” says Oliver Hermes.