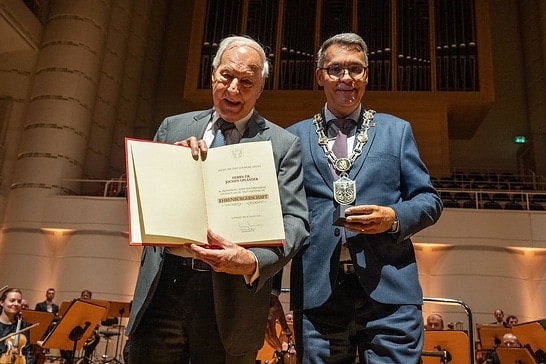 Dr.-Ing. h. c. Jochen Opländer and Dortmund's mayor Thomas Westphal (SPD) at the presentation of the honorary citizenship at the Dortmund Concert Hall.

Dortmund. On 18 August 2022, Dr.-Ing. h. c. Jochen Opländer was ceremoniously awarded honorary citizenship of the City of Dortmund. During the ceremony at the Konzerthaus Dortmund, Mayor Thomas Westphal presented him with an honorary citizenship certificate and a ring of honour from the city. The ring is in gold and contains a stone engraved with the Dortmund eagle.

“On behalf of the entire Wilo Group, I congratulate Dr. Jochen Opländer on this honourable distinction. During our long period of professional cooperation, a special relationship of trust has developed between us, which is why I am particularly pleased with this honour for him,” said Oliver Hermes, President and CEO of the Wilo Group.

The Mayor of the City of Dortmund paid tribute to the honorary citizen in front of around 300 invited guests. “With Jochen Opländer, we are honouring an outstanding personality, a Dortmund citizen who has had a lasting impact in this city in an outstanding way and who continues to make an invaluable contribution to strengthening our community in Dortmund. Jochen Opländer is an impressive, responsible, and successful entrepreneurial personality and, on many levels, also a philanthropist who has continuously demonstrated over the past decades that he also sees his actions and work as a task in the service of society. He takes on a great responsibility as a matter of course. Many initiatives in the fields of science, sport, culture, and education would not have been conceivable without Jochen Opländer’s commitment and support, or would not have come into being in the first place. I am very pleased that the City Council has awarded Jochen Opländer the rights of honorary citizen. Jochen Opländer has rendered outstanding services to our city,” said Thomas Westphal.

Dr. Raphael von Hoensbroech, Artistic Director and Managing Director of the Konzerthaus Dortmund, gave the laudatory speech. According to him, it is Dr. Jochen Opländer’s attitude that makes him such a special personality. “It is perhaps best summed up in this sentence of yours: Everyone who can is obliged to contribute to the welfare of society. And you are part of it,” described the laudator.

In his words of thanks, Dr.-Ing. h. c. Jochen Opländer said: “It is a very great honour for me to receive this distinction. The promotion of science, education and social affairs, culture, and sport has always been close to my heart. At the same time, I also see it as a duty for every entrepreneur to give something back to their hometown and make it better together.”

The Wilo Group can now look back on more than 150 years of successful company history. The Wilo-Foundation was established by entrepreneur and benefactor Dr.-Ing. h. c. Jochen Opländer. The main motives for establishing the foundation were to create the conditions for prosperous corporate development, to strengthen the outstanding social and ethical responsibility towards the employees, to preserve the corporate culture and the independence across generations as well as to continue a long family tradition, to maintain the family values without neglecting the future-oriented ways of thinking and acting and ambitious goals.

With the establishment of the foundation, the majority of shares previously held by the family in the globally active Wilo Group were transferred to the foundation. The family foundation is also socially involved in the areas of science, education, culture, sports, and social causes. The focus is on the global issues of the future: water, environment and climate protection as well as technology and digital transformation. In accordance with its funding motto “empowering young people”, its commitment primarily benefits young people.

Dr.-Ing. h. c. Jochen Opländer has also appointed Oliver Hermes as Chairman of the Board of Trustees of the Wilo-Foundation with effect from 13 April 2019 until he reaches the age of 75. Since then, Oliver Hermes has embodied the fifth generation of the family business.