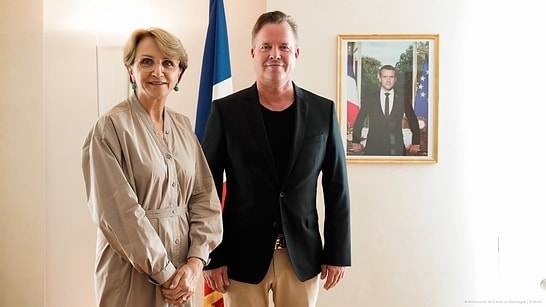 The Ambassador of France to Germany, I.E. Anne-Marie Descôtes, as well as Oliver Hermes, Chairman and CEO of the Wilo Group, photo: French Embassy to Germany.

Lifting of the German-French axis

In geopolitically challenging times, it is important to move even closer together. In the current multiple crises, the close partnership between France and Germany has proven to be intrinsically important for European cohesion. The French Ambassador to Germany, I.E. Anne-Marie Descôtes, and Oliver Hermes, President and CEO of the Wilo Group, agreed in Berlin at the beginning of this week. Oliver Hermes was now on a return visit to the French Embassy in Berlin after the ambassador was a guest in the old premises of the headquarters on Nortkirchenstraße in 2019.

The pandemic-delayed return visit was now all about the close connection between the two countries and the standing together for a strong Europe. Oliver Hermes added: "In times of ever-increasing decoupling, it is important to build new bridges instead of tearing down the pillars. I am pleased that with the ambassador we have an advocate for a strong Europe at our side. This is of great importance for the Wilo Group as a globally active company with a firm presence in France." In his conversation with the ambassador, the Wilo CEO also emphasized the importance of german-French customer and supplier relationships in times of uncertain supply chains.