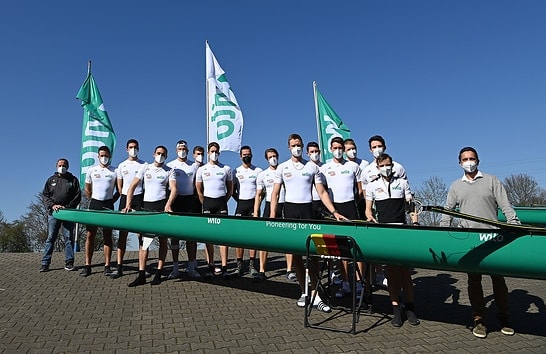 After securing gold at the European Championships in Poznań back in October, the team is preparing for the postponed Olympic Games in Tokyo in July.

The Wilo Group, a global leader for pumps and pump systems, has been the main sponsor of the Team German Men’s Eight since 2010 and continues to support the model sportsmen even in turbulent times like these. “We’re proud of the fact that we’ve been a consistent partner of the flagship of German rowing over many years of successful competition”, explains Oliver Hermes, President & CEO of the Wilo Group. “In particular with a view to the Summer Olympics in Tokyo, which have been postponed to this year, it’s important for us to get behind the Team German Men’s Eight”. And it’s not just the past months that have emphasised the value of having reliable partnerships, says Oliver Hermes. This is reflected in a high level of mutual identification between employees and athletes who, for example, regularly complete internships at the company over the course of their studies.

The cooperation is a successful model: Over the past eleven, hugely successful years, the team has been crowned European Champions on eight occasions, World Champions four times, and also managed to bring home the gold medal at the London Olympics in 2012. After securing gold at the European Championships in Poznań back in October, the team is now preparing for the postponed Olympic Games in Tokyo in July: “The relationship between Wilo and the Team German Men’s Eight goes far beyond a mere sponsorship arrangement. We believe strongly in this cooperation and see it as a long-term partnership”, explains Kay Hoffmann, Director Government & Public Affairs. The fact that the junior team is not only the current U23 European Champion and managed an impressive third behind the German Men’s Eight and the team from Poland at the Schleswig-Holstein-Cup in Rendsburg is further confirmation of the successful partnership. “The Wilo-Foundation’s strong support for young talent ensures that rowing in Germany, and especially at the Dortmund location, will retain a solid foundation going forward, and that the success story can continue despite the many changes expected after the Olympic Games”, explains Wilo CEO Oliver Hermes.