For many years the home of Borussia Dortmund has counted on the energy efficient, reliable and high-performance products of Dortmund technology company Wilo. From the water supply for the VIP areas, to the changing room heating and the undersoil heating system: Wilo product solutions create a green environment. Since 2019, new Wilo-Stratos MAXO models have been providing the supply for the south stand.

The history of the stadium begins in the mid 1960s when the decision was made to build a second stadium alongside the outdated “Rote Erde” arena in time for the 1974 football World Cup.

Just in time for the 76th Ruhr derby in 1974, everything was ready: the stadium, then known as the Westfalenstadion, opened its doors to 54,000 standing spectators for the friendly match featuring home team Borussia Dortmund against FC Schalke 04. Until the start of the 1990s the Dortmund venue remained largely in its original condition.

A total of three expansion stages have turned the SIGNAL IDUNA PARK into the “La Scala of German football” - through the proximity to the pitch, the acoustics and the unique enthusiasm of the black and yellow football fans. Even the home of football acknowledges its character: the well-known English newspaper The Times named the SIGNAL IDUNA PARK as the world’s best stadium thanks to its atmosphere and facilities. 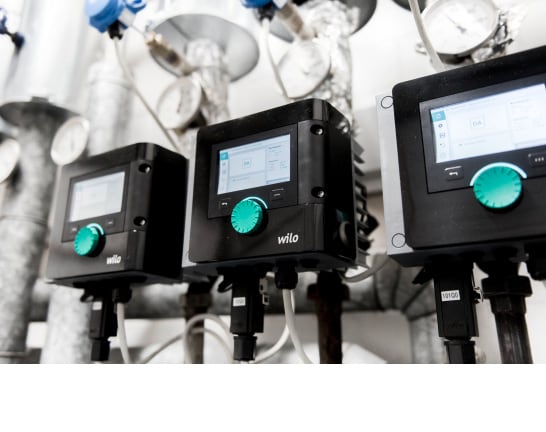 The new Wilo-Stratos MAXO for HVAC and drinking water applications in large buildings sets new standards in energy efficiency - extensive studies and customer interviews enabled Wilo to design a pump which is completely tailored to the customer’s needs, even from the earliest development stage. “Our Stratos MAXO is the first smart-pump in the world[1]. Thanks to fully optimised and innovative energy-saving functions like Multi-Flow Adaptation and No-Flow Stop, in addition to a very good EEI of ≤ 0.19 to ≤ 0.17 depending on the model, it also sets new standards for system efficiency in the market”, says Michael Dieckmann, product manager at Wilo.

With its high connectivity, the Wilo-Stratos MAXO can be more flexibly integrated into a wide variety of applications. From integration in building automation to control via app, Wilo uses intelligent and smart technologies to ensure a comprehensive communication capability – naturally, this also applies to the Wilo-Stratos MAXO. With the help of the most recent version of the Wilo-Assistant app, Wilo delivers the entire world of high-efficiency pump technology directly to smartphones and tablets.

The new design and the intuitive user guidance are even more useful for tradespeople, consultants and operators in their daily work. New functions and connective solutions add to the range of features already offered by the previous Wilo-Assistant. Sites and central operating statuses can be called up and monitored in real time. But the app, with its remote control and remote maintenance functions, also provides advance support, e.g. during planning and pump selection, during installation and commissioning and during operation.

[1]We understand a smart-pump as a new category of pumps, which goes far beyond our high-efficiency pumps or pumps with pump intelligence. The combination of the latest sensor technology and innovative control functions (e.g. Dynamic Adapt plus and Multi-Flow Adaptation), bidirectional connectivity (e.g. Bluetooth, integrated analogue inputs, binary inputs and outputs, Wilo Net interface), software updates and excellent usability (e.g. thanks to the Setup Guide, the preview principle for predictive navigation and the tried and tested Green Button Technology) make this pump a true smart-pump.