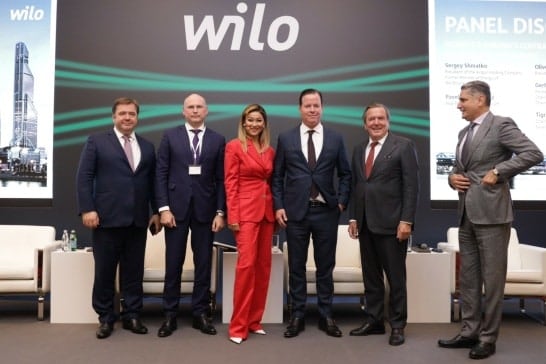 Moscow. On 12 September 2019, the Dortmund technology group Wilo invited over 200 high-ranking guests from politics and industry to an innovation conference in Moscow. Oliver Hermes, President & CEO of the Wilo Group and member of the Executive Committee of the German Eastern Business Association, welcomed Gerhard Schröder, former Chancellor of the Federal Republic of Germany, Elvira Nabiullina, President of the Russian Central Bank, and Tigran Sargsjan, Chairman of the Eurasian Economic Commission, as guests of honour. Marina Kim, Russian television presenter and journalist, led through the multifaceted programme.

Industrial policies as a motor for economic growth

The event focused on the future of international industrial policy and the importance of Russia and Central Asia as an economic and cultural bridge between Asia and Europe. „The discussion concerning strategic industrial policy is undergoing a global renaissance. We want to take these developments as an opportunity to discuss new strategic relationships and strengthen existing alliances with you“, opened Oliver Hermes the innovation conference. Hermes once again emphasized the importance of industrial policies with the presentation of some recently published industrial strategies, such as the "Made in China 2025 Initiative", the visions formulated in the Near and Middle East for further diversification of the economy or the Chinese "Belt & Road Initiative".

A special focus of the keynote speakers was on the current geopolitical challenges that industry is increasingly facing. International trade conflicts such as the conflict between the United States of America and the People’s Republic of China were also discussed. “An important external factor is a slowdown in growth of the global economy, which has proven more tangible than expected due to, among other things, the growing contradictions in international trade”, explained Russian Central Bank Governor Elvira Nabiullina. Nabiullina was named 2015’s Central Bank Governor of the Year by Euromoney magazine and 2016’s Best Central Bank Governor in Europe by The Banker magazine. She gave an outlook on the development of the world economy and presented Russia's fiscal strategy. It was only at the beginning of this month that the Russian central bank had followed its course and lowered the key interest rate to seven percent.

Russia's and Central Asia's role as a motor of integration

Thanks to the government-driven diversification of the Russian economy and its advantageous geographical location, Russia will play a central role as a driver of innovation for the entire Eurasian region and will become more attractive for foreign investment. These investments are increasingly coming from Asia. Gerhard Schröder, former Chancellor of the Federal Republic of Germany, has been working for years to intensify German-Russian relations. In his keynote speech, he expressed the need for a stronger dialogue between the two countries, especially in difficult times: "I believe in the common future of the European Union and the Russian Federation!”

At the end of the Innovation Conference, host Oliver Hermes was impressed by the discussions of the day and appealed to representatives from politics and industry to maintain and support alliances to safeguard a multilateral, global world order with free economic structures: “Globalization, global networking and free trade have led to a growing world economy. Now, after all these years of upswing, the global economy is facing increasing uncertainty. One quickly gets the impression that industry, especially in Europe, has no courage to fight against this uncertainty. I am convinced that today's Innovation Conference has provided the ideal platform to set new impulses for joint future strategies and to position ourselves as ambassadors of a multilateral world order".