Wilo is a partner of Wasserstoff-Hanse 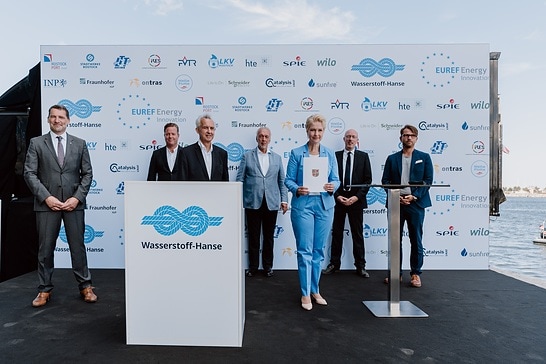 The Port of Rostock: Where Eastern Meets Western Europe

In the fight against climate change, it is important to explore new ways. However, sometimes part of the solution can be found in existing collaborations. This is the thinking behind “Wasserstoff-Hanse” [Hanseatic Hydrogen], an initiative of the German federal state of Mecklenburg-Western Pomerania and the EUREF Energy Innovation (EEI), which was launched in Rostock on 5 August in the presence of prominent businesspeople and politicians.

The Wilo Group also actively supports this initiative. Oliver Hermes, President & CEO of the Wilo Group, took this opportunity to present Wilo’s hydrogen strategy. “As a leading technology company that produces pumps, systems and solutions, water is a core part of everything we do. Converting H2O to H2 is an important step that we are fully behind. We want to make our contribution to global climate protection by helping green deals come to light. Industry has a crucial part to play here.”

Wilo is therefore an active partner and supports this objective by turning its existing energy partnership with Russia into a climate partnership. By importing and storing climate-neutral hydrogen, existing infrastructure can be used to fully exploit further potential.

After a few introductory words from Manuela Schwesig, Minister-President of Mecklenburg-Western Pomerania, the declaration was ceremoniously signed by all the partners. The establishment of “Wasserstoff-Hanse” gives us the chance to tackle the challenges of transitioning to greener energy, along with the energy and environmental partners of the Baltic States and the countries of Eastern Europe. “Wasserstoff-Hanse” takes a major step towards this future and contributes massively to making Europe the first climate-neutral continent on earth.