A saviour during the monsoon

India’s monsoon is both, a curse and a blessing. While the agriculture depends on the natural water supply, Mumbai’s inhabitants and infrastructure suffer from the enormous deluge of water. Nearly thirty Wilo axial submersible pumps operate in four different water-pumping stations, facing the challenge during rainfall season.

Mumbai is big. It is manifold. The city, formerly known as Bombay, is not only India’s economic hub; it also combines a prolific film industry, seedy quarters as well as luxurious residences and a tropical forest inside an urban zone. Located on a peninsular site on Bombay Island, Mumbai is one of the largest and most densely populated mega metropolis in the world. The city’s climate usually is warm and humid – from June to September however, heavy winds coming from the southwest bring the Monsoon season. This phenomenon is perceived in different ways – while it revitalises the dried out environment and restores the beauty of nature, regions are getting hit by floods and heavy monsoon rains cause devastating landslides, damaging public infrastructure. Today, Mumbai is the only city in India with storm water pumping stations. At high water levels, these stations release water from a drain or nullah into the sea, while the flood gates prevent seawater from entering the city. According to the “Brihanmumbai Storm Water Disposal” (Brimstowad) project, Wilo India has currently equipped four of eight stations. “Wherever the land level is lower than the sea level, water logging is bound to happen. Pumping stations are responsible for two main things: they pump out rainwater and prevent high tides from seeping into the city. Each pump can push out 6,000 litres of water per second”, says Rajesh Unde from Wilo India. “We are more than delighted to have designed, manufactured, tested, erected and commissioned our axial flow submersible pumps for the stations.” 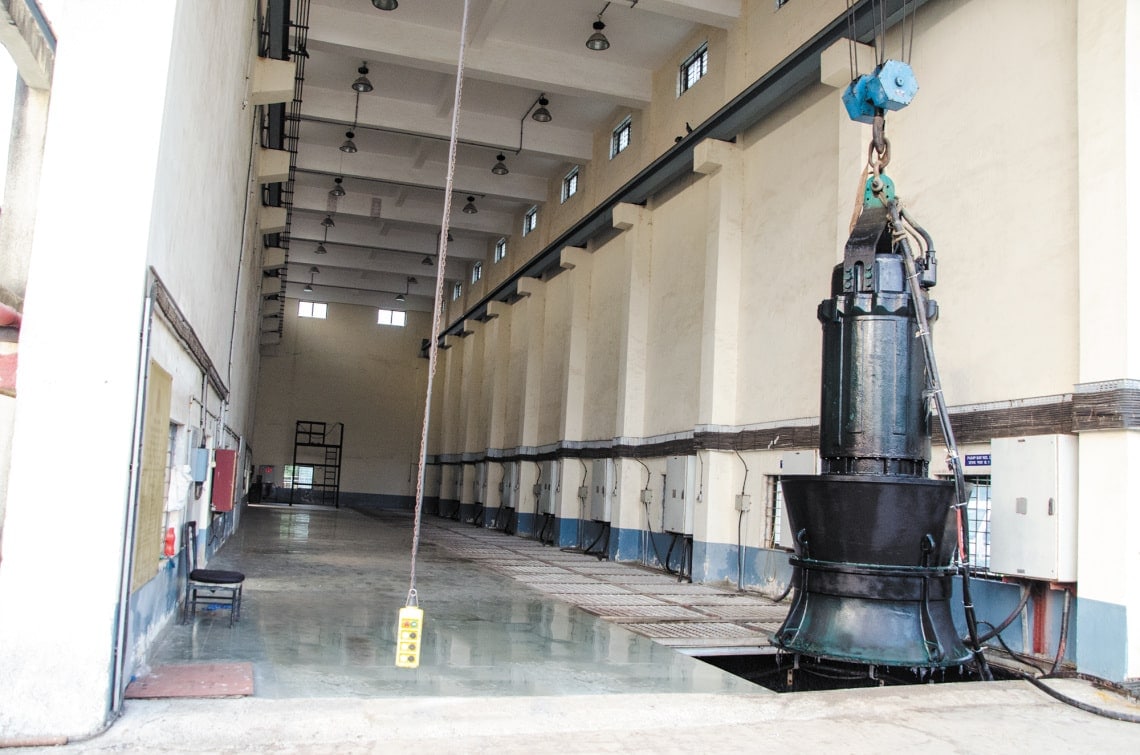 Axial submersible pumps as a solution

Tidal control gates should be designed to operate automatically, which means they open or close depending upon the tide and flow conditions. When the tide is low, the tidal control gates must remain open so that flood water can flow through the drain into the sea. However, during rising tide conditions the flood control gates will be closed and the water enters the proposed storm water pumping station through the inlet bay and screens. The flood water shall then be pumped into the discharge channel of the pumping station towards sea.

In the event of flooding, the flow is restricted and tidal flaps must be installed to prevent the water from entering the outflow and the pumping station. Wilo India has been involved in the project from the designing stage, to support the scheme and cover the smooth operation and performance of all pumps provided on site. “Our axial submersible pump was the optimal solution for the requirements within the project. Its own weight ensures self-centering seating in the discharge tube and despite the size it is easy to install”, explains Rajesh Unde from Wilo India. “Temperature monitoring, vibration sensors, thermal motor protection as well as leakage sensors in the motor ensure the high reliability even under difficult operational conditions.” While providing the complete pump technology for the pumping stations, Wilo also carries out the complete Service. The engineer’s visits are scheduled on a quarterly basis, while in addition Wilo conducts pre- and post-monsoon checks, post monsoon to ensure a smooth operation of all pumping systems. Wilo Service engineers are on standby, in case of potential emergencies and will also monitor the pumps on a regular base.

Low-lying areas in Mumbai such as Milan Subway and Hindmata Junction are especially prone to flooding as the water from Storm Water Drains (SWD) can’t be discharged into a sea or a creek. The coastal city also has to deal with tide level variations which prove to be a big challenge for releasing rain water into the sea. Mumbai’s drainage system is more than 100 years old, at least in some parts of the city. The whole system consists out of 2,000 km of open drains, 440 km of closed drains, 186 outflows and more than 30,000 water entrances. Mumbai’s storm water drain network is huge, it takes approx. 438 sq. km in total. During the Monsoon season, the coastal city receives more than 3500mm rainfall. Its intensity, frequency and duration ratio has aggravated over the years. The capacity of most of the drains is around 25 mm of rain per hour during low tide, which is exceeds routinely during the monsoon season in Mumbai.