A big step towards energy transition

The multinational technology company Wilo has officially commissioned its hydrogen plant at the company headquarters in Dortmund, developed in collaboration with the French electrical engineering company Schneider Electric.

Wilo and Schneider Electric open H2Powerplant at the Wilopark in Dortmund.

The multinational technology company Wilo has officially commissioned its hydrogen plant at the company headquarters in Dortmund. The grand opening of the H2Powerplant took place during the international industry conference at the Wilopark in Dortmund. Over recent months, the H2Powerplant has been developed in collaboration with the French electrical engineering company Schneider Electric. Wilo views this as one of the key technologies to achieve the Paris climate goals.

“Whether in industry, transport or the heating sector, our society needs green energy in all areas of life”, said Oliver Hermes, President and CEO of the Wilo Group during the opening ceremony. Oliver Hermes and Jean-Pascal Tricoire, President and CEO of Schneider Electric, then signed a memorandum of understanding (MoU) in which both companies define the strengthening of their strategic cooperation. “With this plant, we are creating the basis for a self-sufficient, decentralised and regenerative energy supply network and showing how industrial companies can make an essential contribution to climate protection and sustainability with forward-looking solutions that are open to different technologies,” Oliver Hermes continued.

Hydrogen produced from green energy such as photovoltaics or wind power is carbon neutral and can be stored and transported. In addition, the molecule provides significant storage capacities for solar power. Just one tonne can store up to 33,330 kWh of energy. That is the equivalent of the annual consumption of 11 three-person households in an apartment block.

The plant at the Wilopark can store up to 520 kilograms of hydrogen in the 29.8 metre tank and consists of four core components: the photovoltaic system on the roof of the Smart Factory, an electrolyser (supplied by Enapter), a hydrogen storage tank and a fuel cell (supplied by Proton Motor).

The electrolyser separates the molecular compounds of water (H2O) into hydrogen (H2) and oxygen (O). In this way, the modular system should produce up to 10 tonnes of green hydrogen per year – completely from renewable energies. “We can also use the waste heat released by the electrolysis process directly on site in the interconnected system or convert it into cooling”, explains Oliver Hermes. “We can therefore optimise overall system efficiency and make a further big contribution to efficient, crisis-proof and climate-neutral production at the Wilopark.” The plant is initially used for emergency or back-up power supply. However, current designs even allow for an expansion for a self-sufficient energy supply of up to two days. 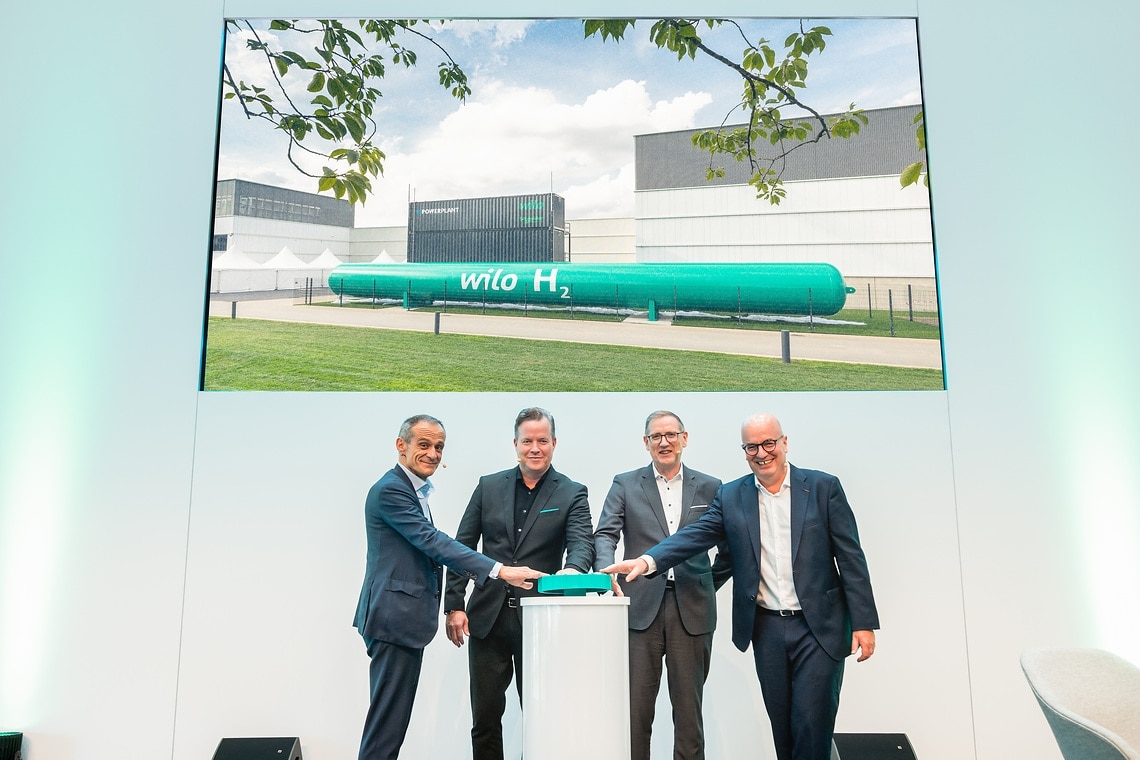 A strong contribution to climate protection “made in Dortmund”

The new strategic partnership between Wilo and Schneider Electric is intended to smooth the transition to the environmentally friendly hydrogen technology. The long-term aim is to become a global player in the creation, storage, distribution, and utilisation of climate-neutral hydrogen. Wilo laid the foundation for this last year by establishing its own hydrogen team. With its EcoStruxure Microgrid Advisor and the EcoStruxure Automation Expert solution, Schneider Electric is providing the latest digital technologies of Electricity 4.0 for a highly automated smart grid.

The two cooperation partners are now planning the serial production of green hydrogen systems for the decentralised energy supply of industrial and private applications. “We’re pleased to be able to expand our strategic partnership with the Wilo Group. With the hydrogen plant and the associated applications, we are aiming to provide clean, low-carbon energy with improved efficiency for certain sectors: logistics, data centres and industrial SMEs”, explains Jean-Pascal Tricoire.

Transition accelerated by the energy crisis

Not least, the ongoing energy crisis has accelerated efforts to find sustainable solutions in many places. Wilo has already been driving the energy transition forward for decades with efficient products and solutions. “As an innovation leader in the industry, Wilo always has been, and still is, a pioneer in energy efficiency”, explains Oliver Hermes. An integral part of this corporate identity is the fact that the multinational technology company actively shapes change processes and finds solutions to global challenges.

The corporate strategy of the technology company has long comprised answers and solutions for the essential megatrends of urbanisation, water shortage, globalisation 2.0, climate change and energy shortage, which are flanked by digital transformation as a key factor.