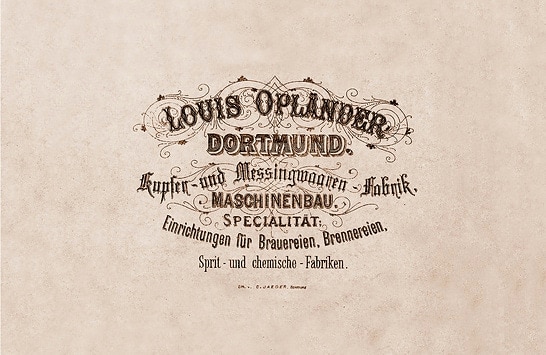 Caspar Ludwig Opländer settled in Dortmund in 1872, got married and, as a master coppersmith, founded his own copper- and brassware factory, the “Kupfer- und Messingwaren-Fabrik Louis Opländer”. Thanks to his drive, discipline and, above all, excellent technical skills as a craftsman, the factory became extremely successful. His distillation systems, for instance, manufactured in Dortmund, were sold in the whole region, including large parts of the Muenster region, where many of them remained in operation until 1950. Dortmund, a vibrant city of industry and beer, was a lucrative environment for copper and brass works, such as those needed used in breweries. The rise of industrialisation and the growing prosperity of the late 19th century led to a heavy increase in the demand for new distilleries and breweries. Moreover, in the fast-growing towns of the Ruhr district, the number of homes with directly accessible, built-in water taps also grew, and with it the demand for domestic inlet and outlet pipes.

Caspar Ludwig Opländer’s family had eight children. Following his father’s early death at the age of 46, the oldest son, Karl Wilhelm Ludwig, called “Louis”, took over when he was twenty, managing the business together with his mother, Wilhelmine Gertrud Caroline. The latter proved to be an extremely vigorous, strong and entrepreneurial leadership personality. She and her son jointly managed the business with diligence and success. She was 80 when she died – a remarkable age at that time. Her household account book still exists and speaks of her meticulousness: she noted every penny that was spent. Since Louis had to take over as his father’s successor, suddenly and unexpectedly when he was quite young, he was unable to complete his engineering studies in Hanover. His seven siblings also received sound vocational training – something that was rather unusual at that time.